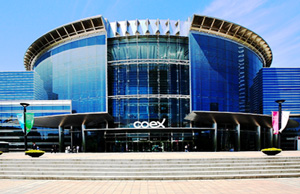 Since opening in March 1979, Coex has provided a global exchange platform where people and businesses come together through exhibitions and conferences. Coex has become a pillar of the Asian Meetings, Incentives, Conventions and Exhibitions (MICE) market as both Seoul’s greatest exhibition venue and a tourist attraction with infrastructure to service all business and conference needs.

Coex is comprised of four stories above ground with 36,007 ㎡ of exhibition space and a floor area of 460,000 ㎡. The four exhibition halls can be partitioned into 12 separate spaces, including a convention hall with space for up to 7,000 people. The conference facilities holds 55 meeting rooms equipped with state-of-the-art equipment and operated by a cutting-edge building management system.

In addition to the business facilities, Coex also offers a gateway to Korean culture. Situated next to Bongeun Temple and connected directly to the Coex Starfield Mall, Coex offers guests the chance to connect to both ancient history and modern pop culture. Propelled by the opening of [email protected] Artium, a juggernaut of Korean pop music, in 2015, and the designation of Gangnam as a Special Tourist Zone dedicated to the MICE industry, Coex has evolved into a centre for business and culture alike.

Coex’s state-of-the-art infrastructure and spacious conference rooms and exhibition halls attract many high-profile, large scale events. In November 2010, Coex hosted the G20 Seoul Summit. Coex again hosted the leaders of 53 countries during the Seoul Nuclear Security Summit in 2012. Coex’s strategic location in Seoul is one of its pull-factors for event organizers and participants. With its 600 year history and refined modernity including IT power and K-Pop culture, Seoul became a UNESCO City of Design in 2010 and was listed No. 3 in the New York Times’ list of Must–See destinations.

Coex is not only Korea’s top convention and exhibition venue, but also the heart of the Korean World Trade Centre complex. Every year, more than 35 million visitors choose Coex and the surrounding facilities as their destination, with an average of 100,000 people arriving each day. Despite the massive volume of guests and activities at the complex, Coex has become a pioneer in Korea’s green growth industry, achieving many environmental management firsts in Korea and keeping pace with the latest emerging eco-friendly technologies. Since kicking off the official Green Campaign in 2004 at the 4th Korea-Japan-China VIP Forum, Coex have pursued a policy of holistic environmental stewardship, becoming a leader in the Green MICE industry.